How to hold a pistol : the complete beginner’s guide

How to Zero a Scope : The Step-By-Step Tutorial

How exciting to be taking your first steps into the world of guns. Whether you’ve just purchased your first pistol or you’re seriously considering it, you should know that using a firearm is nothing like what we usually see in movies.

In movies, guns are used casually, meant to make characters appear badass, and the way they hold their pistols are usually incorrect. In short, it’s all for effect. In the real world, guns are powerful weapons that give their wielders the power to destroy lives, so they should always be treated with respect and care.

Just owning a gun isn’t enough. You should also know how to maintain it, and how and when to use it or not. And hopefully, you never have to use it in a dangerous situation. But those can happen, in which case being prepared will give you an edge to protect yourself and your loved ones.

In this article, we’re going to cover how to hold a pistol as a beginner. It’ll allow you to become more familiar with your gun, make you more confident in handling it, and give you the proper technique to use it efficiently.

Before diving into the heart of the matter, let’s get a few important things out of the way.

Should a situation ever occur where the use of a firearm becomes highly likely or necessary, you need to understand that it’s a different beast altogether compared to training at the shooting range. The heart races, adrenaline spikes, and fear can leave some people completely paralyzed. Situational awareness and presence of mind can prove even more crucial than shooting technique.

It’s important to be able to assess the situation with clarity. In the vast majority of conflicts, deescalating or simply evading the situation is preferable to whipping out a gun. Contact law enforcement before taking any actions yourself, unless you’re left with no other choices. Knowing how to handle a pistol isn’t a free pass to acting irresponsibly with it.

Furthermore, firearms aren’t meant to be ego boosters or to terrorize people. When a firearm comes into play, there is always a strong possibility of death, whether it be yourself, your aggressor, or innocent bystanders.

Finally, this guide will teach you how to handle a pistol, but it doesn’t mean you’ll be trained after reading it. Make sure to practice regularly and educate yourself further on safety.

That being said, let’s move on and start learning how to grip a pistol properly. For the purposes of this guide, all the steps are to be followed with an unloaded gun, or “dry fire” mode.

It’s something you’re going to hear a lot when it comes to gun safety: always treat every gun as if it’s loaded. Make sure to always point your gun in a safe direction, away from people and yourself. Even if the slide is pulled back and there’s no magazine in it, employ the same safety measures.

Start by clearing the gun. To do so, remove the magazine and set it aside. Move the slide backward and forward a couple times to make sure the chamber is empty. Lock the slide in the pulled back position and confirm visually that there’s no round in the chamber. Empty the magazine by removing all the rounds and re-insert it in the gun, then guide the slide forward.

To shoot effectively, you should always use two hands whenever possible. A two-handed grip provides you with more stability, which will make you more accurate.

Grab the gun high on the grip with your dominant hand. The webbing on your hand should be placed on the curve where the grip ends. Close your middle, ring, and pinky finger around its base, right under the trigger guard. Hold the gun firmly, but not overly tightly. Your thumb is wrapped around the grip, near the top. Your index finger should be extended along the frame of the gun. Never keep it on the trigger unless you’re about to fire.

Don’t be surprised if this two-handed grip feels awkward at first. Getting used to it just requires a bit of practice.

Draw your gun with your dominant hand, and hold it using the method we’ve just reviewed. Keep your index finger off the trigger. Hold the gun in front of your abdomen, close to your body, pointed toward your target. 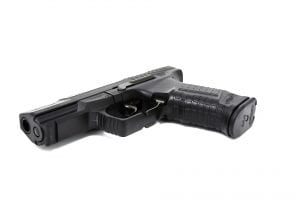 To accurately shoot a target that’s not right next to you, you’ll need to rely on your dominant eye for more accuracy. It’s not necessarily on the same side as your dominant hand.

Adopt the ready position described above. Extend your arms out in front of you, but do not lock them. Your elbows should be very slightly bent. Aim at your target with your dominant eye.

If those three squares are not properly aligned, you won’t shoot accurately. If the middle one is higher than the other two, you will shoot above your target. Likewise, if it is too low, or more toward the left or the right, your aim will be off target in the direction that middle square leans toward.

There’s more to pulling the trigger than you might think at first. Speaking of which, you won’t really have to pull on it, it’s more about applying the proper amount of pressure. Knowing how to manage your trigger will help you fire with accuracy as well as prepare the next shot for better efficiency.

You should keep the phalanx of your index finger closest to your knuckle parallel to the frame as much as possible. The phalanges, plural of phalanx, are those small bones in your fingers that allow you to bend it. The center of your distal phalanx bone (where your fingertip is) should touch the entire trigger. If you don’t properly center it, your gun might have a tendency to veer to the left or right.

Apply direct pressure to the trigger. 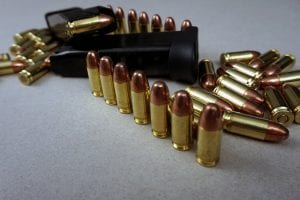 It’s time to put it all together and aim at a target. Perform this with your gun empty at first, or dry fire mode.

You’re in the ready position, your gun drawn and aimed at your target, ready to fire. Your front sight should be clear, right on the target. Don’t be surprised if the front sight moves slightly. Getting it to stay on target is a matter of practice and muscle memory.

Now, being the most accurate possible is also a matter of mindset. Don’t be distracted by your expectation of the shot. Strive to focus purely on your technique, keep your mind still. If you are anticipating the shot, you will tend to lower your front sight ever so slightly in a reflex to see where the shot lands.

Your entire focus is placed on the front sight as you control the amount of pressure you put on the trigger. You will hear the click of your gun, which should come as a surprise because you are not anticipating it.

You can rack the slide and continue practicing to become more familiar with the process.

Once you know how to hold your pistol, you’re ready to try it out with actual rounds. Make sure to wear adequate eye and ear protection every time you’re practicing.

Load the magazine and put it in the gun. Rack the slide. Now, there’s a round in the chamber. Use the two-handed grip described in this article, and don’t put your finger on the trigger until you already have your target in the front sight.

With your dominant eye, stay focused on the front sight. Apply firm pressure on the trigger. Repeat the process until your magazine is empty. Don’t think about where the rounds land while doing it. Once all the rounds have been fired, the slide will lock back. Remove the magazine, rack the slide a couple times, and make sure there are no rounds left in the chamber. Lock the slide back and set the gun aside.

How to Hold a Pistol as a Beginner

Now you have everything to get started with holding your pistol. All the steps outlined are essential in handling a pistol properly, so make sure to leave nothing out.

Keep practicing to develop good consistent technique, and don’t forget to be safe!

How to disassemble a Glock: explained step-by-step